After The Dance by Terence Rattigan 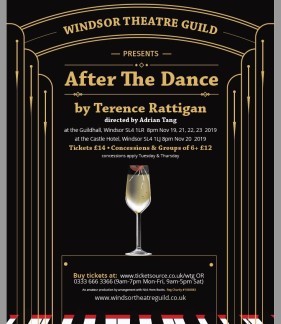 Premiering in June 1939, After The Dance follows the decadent married lives of
David and Joan Scott-Fowler in their Mayfair penthouse apartment. David’s work
as a successful writer has allowed them both to enjoy a hedonistic lifestyle with
their frivolous friends for over a decade. It has even allowed David’s old school
friend John, and younger cousin, Peter, to live with them.
However, the equilibrium is shattered on the arrival of Peter’s sweetheart, Helen
Banner, who is determined to make David sober up, start again, and become a
hard-working member of society. The stage is set for betrayal, unrequited love, and
a challenge to the shallow lives of the elite.
This beautifully written, serious yet satirical view of society’s former ‘Bright Young
Things’ was impeded by the outbreak of World War II and only amounted to sixty
performances at St James’s Theatre. The play was largely disregarded until it was staged at the National Theatre in 2010 (with Benedict Cumberbatch playing David
Scott-Fowler) to commercial and critical acclaim.

Our new venue and pre-theatre menu!

Whilst we are at the Guildhall for the majority of the run, we are delighted to be
staging one performance of After The Dance on November 20th at the Castle Hotel,
opposite the Guildhall.
Furthermore, for the whole week of the run, the Hotel is offering diners a
wonderful pre-theatre menu in their Marco Pierre White Restaurant. For menus
and booking, please call the hotel on 01753 851577.